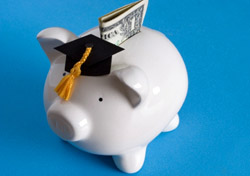 For many students college comes with a hefty price tag. As grants have declined and the cost of college has steadily increased, graduates are left with a degree in one hand and many loans in the other.

In the 2002-’03 school year, loans made up 80 percent of financial aid packages and 20 percent were grants – a big difference from the 20-percent loans to 80-percent grants ratio seen in 1975-’76, according to the United States Student Association Foundation.

The Center for Economic and Policy Research says the major cause of increasing student debt and that shift from grants to loans is the rising cost of college.

“I have been awarding students grants for 30 years,” said Steven E. Brooks, executive director of the North Carolina State Education Assistance Authority. “I would like to see more Pell Grants awarded, but the funding has not kept up with the increasing cost of college and number of students applying.”

As student debt has continued to grow, the USSA pioneered the campaign “Stop the Raid on Student Aid.” The 59-year-old organization is trying to make students aware of proposed legislation that could increase the interest rate cap by more than 25 percent and includes cuts that could trim $9 billion from student aid.

“Currently we are experiencing a worst-case scenario for students,” said Jasmine Harris, USSA legislative director. “First, you have an increasingly small portion of the cost of college being covered by grants, and second, students are forced to take (out) increasing amounts of loans. Their disproportionately high debt upon graduation prohibits them from participating in the economy and all it has to offer. It’s a lose-lose situation.”

Though cost and loans are rising as grants remain stagnant, the College Board found that tuition increases at public universities were not as large as they had been in the last two years.

“The good news is that tuition price increases have continued to moderate over the past year,” said David Ward, president of the American Council on Education in a press release. “But I remain greatly concerned about the longterm outlook for college access in this country and its potential impact on our ability to compete in the global economy.”

The USSA seeks to not only block legislation and cuts that would adversely affect financial aid, but also campaign for all monies cut from higher education to be marked for students. Others agree that the government should be held accountable to students.

“The federal and state governments must increase their investment in higher education. If we fail to take these steps, our nation’s future economic standing could be at risk,” Ward said.

“Students are practically being punished for not being able to afford college when they are born or when they graduate from high school,” Harris said. “That’s why we must demonstrate the power in students taking a stance.”

The College Board found that over the last decade, Parent Loans for Undergraduate Students (PLUS) has become the fastest growing student aid program, and higher-income students are currently benefiting from financial aid more than their lower-income counterparts.

Though aid distribution may not be just and costs continue to rise and outpace grants, college is still viewed as worth the sacrifice.

“Regardless if you have to go part-time, work more than you like or bypass your top choice for a more affordable education, it’s still much better for students to go (to college) than not,” North Carolina’s Brooks said. “Loans may not be such a bad thing because they are a great investment in ourself.”
___
(Charreah Jackson is a junior studying journalism at Howard University in Washington, D.C.)
___